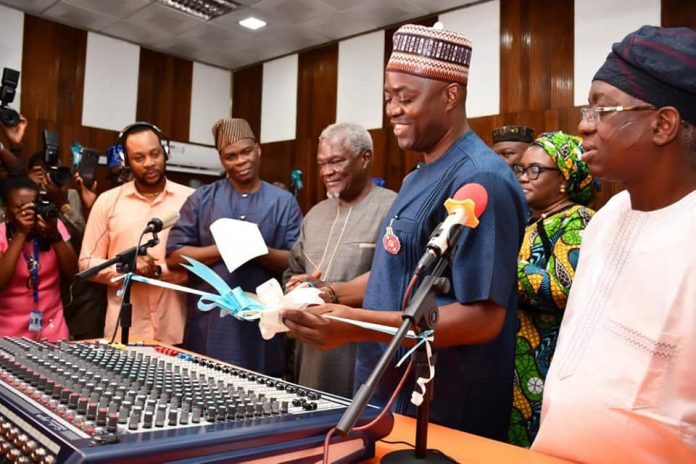 Oyo State Governor, Engineer Seyi Makinde, on Friday, declared the readiness of his administration to build a greater Oyo State, noting that his Government would continue to do things properly even it will take a slightly longer time to get results.

The Governor added that he would continue to run a Government that listens to feedbacks from the citizenry and respond with appropriate actions.

A statement signed by the Chief Press Secretary to the Governor, Mr. Taiwo Adisa, quoted Governor Makinde as stating these at the premises of the Broadcasting Corporation of Oyo State (BCOS), Ibadan, while commissioning the Satellite Audio Network of the corporation’s FM Station, Oluyole FM.

The statement added that the Satellite Audio Network project was embarked upon by the administration of Governor Makinde in August 2019 in fulfillment of the Governor’s promise to turnaround the deplorable situation in which the administration met the historic BCOS.

In his speech, the Governor maintained that with the commissioning of the Satellite Audio Network, the station has exited the analogue mode and could now reach the nooks and crannies of the state and bring feedbacks from the people, which would aid the quality of decisions by Government.

Governor Makinde said: “With this commissioning, we can hear your feedbacks clearer even when you contribute to programmes on air. You can speak more and we will listen more. We will listen to everyone and respond with actions. We will respond by getting better.

“As I drove down for this commissioning, I could not help but think about the importance of communication to the development of any community. I believe if we can’t understand ourselves mutually, we can give different interpretations to what is happening around us. Of course, communication guarantees more feedbacks. The more feedbacks the leadership gets, the better the quality of the decision that will be made.

“I have often taken every opportunity to remind the people of Oyo State that we are an administration that listens. We are not in the business of curbing free speech. When you complain to us about something, we look at it and act.

“I am sure you must have heard that yesterday, we went to the site of the Ibadan Circular Road and issued a stop work order. This is because we don’t want the people of Oyo State to be shortchanged in anyway. You spoke and we listened. The commissioning of this Digital Satellite Network of the Oluyole FM Station is because people spoke and we have listened.

“While on the campaign train, I promised the people of Oyo State that this administration will take the BCOS to a height we will all be proud of and we have started delivering on that promise. With the installation of this Digital Satellite Network, no more Analogue. In Oyo State, we have gone digital. We can now get clean and clear audio signal to the nooks and crannies of Oyo State and get government closer to the people.”

The Governor charged those asking for what his Government has done since taking office not to look too far, stating that the current administration in the State would only do things properly following due process, even if that meant having to wait a bit longer for the positive results it expects in terms of rebuilding the State.

He said: “For those asking what we have done so far. Many are even asking about the security patrol vehicles that we promised. I can tell you that they will be on the road in the next two weeks. The vehicles have to be insured, branded with the new emergency number 615 and communication gadgets have to be installed in the vehicles.

ALSO READ:  Ekiti 2018: Still On Why Fayemi Should Not Run

“Our administration is determined to do things properly, though it may take slightly longer. They still ask us what we have been doing but, today, we have another answer; what they were not able to do in eight years has been done within six months, even following due process.

“It is on record that both BCOS radio and TV did not enjoy any capital project intervention in nearly a decade. But in August, we released a little above N18 million for this project and, today, we are commissioning it in three months of our administration.

“Also, for the first time in about 12 years, BCOS will not have to engage the primitive use of Mobile phones to monitor and transmit from its out-stations in Ajilete and Alaga. It can now send signals directly from the headquarters here in Ibadan. Despite the various commitments of government, we shall find the most effective way to ensure that BCOS TV channel gets due attention. We will get those signals to go beyond Ibadan. We are already on STARTIMES, GOTV. With time, we will get to DSTV.

“It is the desire of this administration that everyone feels the impact of government. The management should keep informing and entertaining the people. We will keep listening. Together, we can and will build a greater Oyo State.”

Earlier, the Executive Chairman of BCOS, Prince Dotun Oyelade, said the station had been operating within the spirit of the current administration, knowing well that probity and accountability were the hallmarks of the government.

He said the BCOS programmes’ content on Radio and TV were currently having a face-lift, which the public and the station’s business partners were taken judicious notice of, saying: “On broadcast content, our television and radio broadcasting are getting better and more innovative.

“Presently, the corporation is working on a constant online presence on all social media platforms (Facebook,Instagram, Twitter,YouTube and Website). All these will be fully available by November 7,2019.

“Also, the corporation is preparing a Mobile Application that allows for instant access to all her content both on TV and Radio. We are intensifying efforts in training our staff and collaborating in technical and programming areas with the BBC in the Uk, Netherlands Training School for Broadcasting and the Botswana Broadcast station.

“We are managing our little IGR so well that by December ending the whole ambience of BCOS will begin to change, from our unkempt sprawling garden to the thatched paintings on the wall of our complex.

“This is to send the right signals to our competitors and stakeholders that we mean business. Sponsors are looking our way as a result of what we have started doing. We look forward to such time in the near future when we won’t need subvention from government and we’ll be in a position to partner government to implement some of its laudable programmes,” Oyelade stated.

Why Buhari Suspended Oyo-Ita As Head Of Service