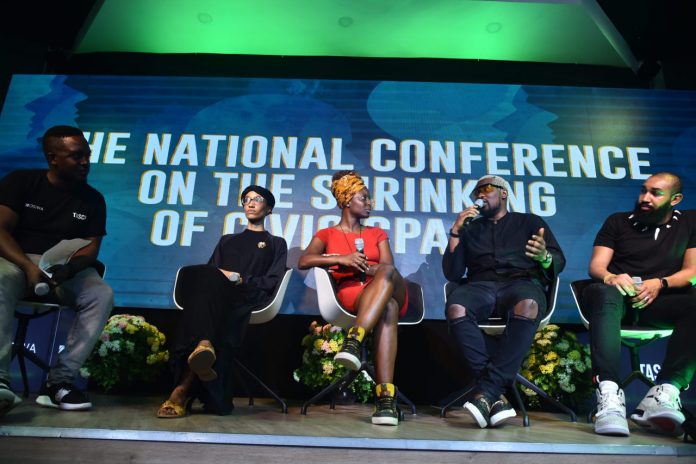 A number of Nigerian celebrities including M.I, Banky W, Kate Henshaw, Beverly Osu, among others have all joined their voices with Socio-Economic Rights, Accountability Project (SERAP), and others to strongly condemn the social media bill describing it as draconian and deliberate attempt to stifle citizen’s freedom of expression.

A panel of known celebrities including Dotun, Folu Storms, Di’ja, Jeff and anchored by Jude Abaga took time to discuss the bill and educate everyone on the power of the media and why it is important for everyone to have a right to speak freely about issues. It was also highlighted that in the reality of the nation, the law may not have allowed people to speak up but social media does and all the ills in society are been brought to light as a result of social media.

Speaking at the event that held in Lagos on Tuesday at the National Conference on Shrinking Civic Space, tagged: ‘Discussing the Social Media Bill and its Effects,’ rapper M.I Abaga said the bill should not be passed and called on the senators pushing for its passage should put a stop to it.

The Chief Executive Officer of Tasck, added: “From the angle of the citizens, we want them to find out who is representing them either at the Senate or House of Representative, then send him a message, stating that the bill doesn’t represent the interests of the citizenry using the hashtag #leaveoursocialmedia #killthebill#.”

Joke Fekumo, the Senior Legal Adviser, Socio-Economic Rights, Accountability Project (SERAP), who also spoke at the event said upon the introduction of social media bill, the organization began fearless advocacy against the bill.

According to her, SERAP recently sent a submission to the Senate on the social media bill and one of its recommendations was that the proposed bill should be dropped, “as it doesn’t fit into the ideals of a democratic society built on the foundations of the rule of law.”

In his remarks, Jude Iloh, Country Representative, Open Society Initiative for West Africa (OSIWA), charged entertainment celebrities present at the event to play their part in changing trajectory through active engagement on various social media platforms and advocacy, “we have to fight to get our country back.

He stated that a lot of Nigerians have made sacrifices for the betterment of the country, urging participants at the conference to effectively use their social platforms such as Facebook, Twitter, and Instagram to change the narrative.

Another entertainer who spoke was actress Kate Henshaw who in her speech said:

“The role of social media in promoting transparency, public accountability and good governance cannot be overemphasized. It has opened new possibilities for citizens to engage with each other, their political representatives and contribute towards an inclusive broad-based process.”

Other advocates that were in attendance to lend their voice and brand image includes Chigul, Lynx, Latasha, & Beverly Osu.

Corporate bodies MTV Base, Aristocrat and UMG, were among some of the industry giants who had representatives in attendance at the conference.

BBNaija: Frodd Evicted From The House