A resident, who witnessed the kidnapping of 27 students and 15 workers of Government Science College, Kagara in the Rafi Local Government Area of Niger State, has described how the kidnappers tied their victims in pairs and took them away.

The PUNCH reports the man, who lives close to the school, on Wednesday as saying that the bandits, who wore  military uniform, stormed the school at 2am.

When one of our correspondents got to the school at 2pm on Wednesday, he observed that many buildings including classrooms and hostels were dilapidated.

The source, who described how the incident occurred,  disclosed that before moving to the GSS Kagara,  the bandits had parked their motorcycles close to  Attahiru Secondary School, a distance of one kilometre to the GSS Kagara.

He stated, “When they (the victims) were being taken away, I saw that they were tied in pairs and marched to where the motorcycles were parked from where they were taken into the bush.”

A worker of the school, who spoke on condition of anonymity, told The PUNCH that the gunmen entered the school from the rear, where the fence had fallen.

According to him, they headed to the staff quarters, where 15 workers, including teachers, were kidnapped before going to students’ hostel. 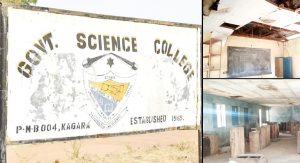 According to the source, a senior secondary school 3, Bejamin Abila, who raised the alarm when the bandits were approaching the hostel was shot dead.

“They abducted 27 students in the hostel and tied all the abductees in pairs before taking them out of the school,” the source stated.

Another source lamented the dilapidation of the school, saying it was prone to bandits’ attacks.

Khamis Tahir, the parent of a worker in the school, in an interview with The PUNCH, said “ I got a call that kidnappers had invaded the Government Science College,  Kagara. Immediately after my prayer,  I moved down to the school.  I realised that my daughter together with some students had been kidnapped.  We are here and many security agents have been moving up and down here”, but up till now we have not heard anything.”

The state Governor, Abubakar Sani Bello, after a security meeting in Minna, the state capital, ordered the immediate closure of boarding schools in four local government areas of the state,  which had witnessed increased kidnappings.

Bello said the action was necessary to save lives of the students as the areas had already been taken over by bandits.

ALSO READ:  JUST IN: Gunmen Abducts Many In Abuja Community 3 Weeks After 5 Persons Were Abducted

The governor appealed to President Muhammadu Buhari to deploy the necessary mechanism in flushing out the bandits.

He ruled out payment of a ransom to free the abducted students and workers. He said the state government adopted the policy to discourage the kidnappers from using the proceeds of their crime to purchase more weapons.

Also on Wednesday,  the governor met with a Kaduna based cleric, Sheikh Ahmad Gumi, at the Government House, Minna.

After the meeting, Gumi told journalists that he would visit Kagara, where the 27 students were kidnapped.

“The governor and I spoke on several ways to deal with insecurity in a holistic manner and find solutions to the insecurity problem in the state,” the cleric stated.