The Oyo State government has expressed its readiness to collaborate with relevant stakeholders to ensure that Yoruba culture does not go into extinction.

The Special Adviser to Oyo State Governor on Culture and Tourism, Hon. Akeem Ademola Ige disclosed this while playing host to the initiators of Egbeje Ede project in his office recently.

Egbeje Ede game is an initiative of a group, the Elegbeje Ede which is aimed at stemming the near extinction of Yoruba language and the fall in value system.

Egbeje Ede innovation is a new educational tool to compliment educational curriculum for Yoruba Language in South West states of Nigeria and by extension others states where Yoruba language is being taught as a subject so that yoruba language would be protected and promoted starting from primary school level. 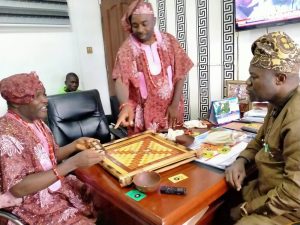 While hosting the initiators, Hon. Akeem Ademola Ige described the initiative as a welcome development, stressing that it is a thing of joy that people are being awakened from their slumber to use natural talents to develop culture and developing tourism heritage in Oyo State and by extension, South Western States.

According to him, “this is part of what the Oyo state government has been craving for. It’s been long that our cultural value is being eroded and we have been thinking of how we can revive our culture. I’m happy that the Alaafin of Oyo, Oba Lamidi Olayiwola Adeyemi, Ooni of Ife, Oba Adeyeye Enitan Ogunwusi, the Olubadan of Ibadanland, Oba Saliu Akanmu Adetunji, the Aare Ona Kakanfo of Yorubaland, Iba Gani Adams and other notable traditional rulers in South West are already shown interest in this project. These are the people that placed a high premium on our cultural heritage and are doing everything to ensure that our cultures do not go into extinction.

“It is a pity that religion has been taking away our culture from us and we know that there is a clear difference between culture and religion. Lack of promotion of our culture is also causing insecurity in the south west. There are some things that have to do with our culture that are now seen as taboo because of religion.

“We will work together to see how we can use this initiative to promote our culture. We have to start from the grassroot. Government has a role to play to inculcate this into the school curriculum right from primary school level; while other concern stakeholders also have roles to play to create awareness to the people in the community.

“I salute your brain for coming up with this brilliant initiative. Some people discovered ludo, draughts and chess games which are being played all over the world. The same talent they used is the one you used to come up with this Egbeje Ede game. When we are talking about twitter, facebook, instagram etc. it is the same brain they used to create them.

ALSO READ:  I Was Emotional About His Personality, Man Who Rushed Towards Buhari Speaks

“I believe that the task to promote Yoruba language is the responsibility of all descendants of Oodua both in Nigeria and abroad. We should therefore join hands to make Yoruba language the cynosure of all languages around the world.” Hon Ige concluded.

Speaking earlier on behalf of the group, Mr Taiwo Temidayo said the project took them five years to carry out research into the reason why children no longer have interest in speaking Yoruba language.

“We found out that students learn fast through sporting activities. We specifically designed the board as a promotion of culture and a source of empowering people. Our goal is to see the prosperous western region and project our culture across the South West.

“We want to use it as cultural sports to inculcate the speaking of Yoruba and moral values in our youth in Yorubaland. This will be a plus for governments across the south western states as no administration has ever done this before. The beauty of this project is that we are the first group that would invent this project in the whole of Nigeria.

“The Yoruba issue is something that concerns all of us Yoruba descendants as we need to promote what is ours. Our aim is to see how this initiative will become a household item, how it will get into the curriculum of the governments in the south western states to promote the Yoruba language and also to serve as a catalyst to create jobs for people of Oyo State. It is also an empowerment initiative to empower the youths through manufacturing, sports and entertainment across the south west,” Mr Taiwo submitted.