It Is A Great Pleasure To Sign The Budget —Buhari

NIGERIAN’s President Muhammadu Buhari on Friday signed into law the 2016 federal budget after months of delay caused by mistakes and discrepancies in the original spending plan. Buhari had last December 22 presented a 6.08 trillion naira (around $30-billion, 26.5-billion-euro) budget to parliament but Friday’s document was slightly lower at 6.06 trillion naira. 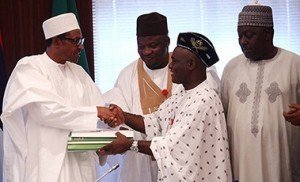 “It is a great pleasure to sign the budget. It is a serious article of faith for the Nigerian people,” the president said at a ceremony attended by ministers, the Senate president and officials.

“The signing of the budget today will trigger concerted efforts to reflate the Nigerian economy, a key element of which is an immediate injection of 350 billion naira into the economy by way of capital projects.”

The budget for Nigeria’s oil-dependent economy is based on a price of $38 per barrel, slightly below the current global market rate of just over $40.

Buhari delayed signing the budget after finding errors that civil society groups indicated possible graft, such as multiple purchases of the same vehicles, computers and other equipment.

ALSO READ:  Why Over 50 Annoyed Contractors Blocked Entrance To Minister Of Agric's Office

The former military head of state, who has embarked on a widespread anti-corruption campaign since taking office last May, has claimed some lawmakers removed and replaced proposals.

He has promised to punish those involved.

The delay contributed to the stagnation in Africa’s biggest economy caused by the slump in global oil prices, panicking investors already cautious about slowing growth and high inflation.

Buhari admitted on Friday that Nigeria was “experiencing probably the toughest economic times in the history of our nation” but was pinning its hopes on the expansionary budget.

Mr and Mrs Bayode of Onibudo Street, Sango-Ota, Ogun State have appealed to the public for financial assistance to treat...

Osun State will revert to the 6-3-3-4 educational system, Commissioner for Information and Civic Orientation, Mrs Funke Egbemode, has said....