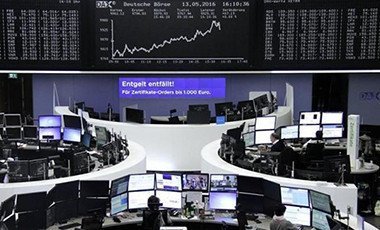 EUROPEAN shares fell in subdued trade on Monday, unable to maintain the momentum of Asian stocks that shrugged off sub-par Chinese economic data to eke out modest gains.

The yen fell against the dollar, helping Tokyo stocks higher, while Irish government bonds outperformed other euro zone sovereign debt, pushing borrowing costs to a one-month low after the once bailed-out country regained its third investment grade credit rating over the weekend.

Oil prices jumped to a 2016 high after Goldman Sachs said the market had flipped into deficit. [O/R]

The FTSEurofirst rose 0.6 percent on Friday after U.S. retail sales recorded their biggest monthly rise in a year.

Data from China over the weekend was less rosy. April’s retail sales, factory output and fixed-asset investment all fell short of forecasts by economists polled by Reuters.

The numbers were not enough to prevent Chinese shares rising on Monday, however. The blue-chip CSI300 index .CSI300 closed up 0.7 percent and the Shanghai Composite .SSEC gained 0.8 percent.

The yen JPY= edged down 0.1 percent to 108.73 per dollar and the euro EUR= rose 0.1 percent to $1.1316. The dollar was flat against a basket of major currencies .DXY, having touched a three-week high on Friday.

“There may be rising scope of the BOJ (Bank of Japan) considering a more aggressive policy stance later on,” said Manuel Oliveri, currency analyst at Credit Agricole.

“It must still be kept in mind that inflation expectations as measured by five-year inflation swaps remain close to multi-year lows and that Governor (Haruhiko) Kuroda appears to make a bigger case of additional measures being considered should it prove necessary.”

CCT: Saraki Has No Case To Answer — Supreme Court

Market Capitalisation Down By N91bn