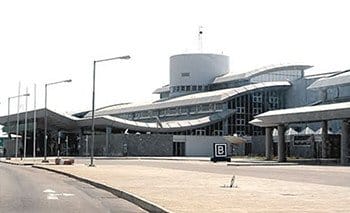 THE Managing Director, Julius Berger, Mr Wolfgang Goetsch, has said that the runway at the Nnamdi Azikiwe International Airport, Abuja, could be fixed without closing down the airport.

However, the company said the work would take more than two years.

Goetsch made this known in his submission before the Senate on Tuesday at plenary.

According to him, the runway can be repaired without closing the airport, but is dependent on the scale of the repair.

He said that if there were only spot damages, then it could be repaired in a localised way.

“It can be shut down in the night. The spot can be repaired in the morning and temporarily given back for usage.

“But the state of the runway in Abuja shows extent of damage and deterioration. The whole runway from one end to the other end is damaged.

“This means that if the method of spot repair is loose, you start from one side of the runway, lock it in the night and in the morning to open it up for traffic.”

According to him, this means that the spot repair will take two and half years to keep the runway stable.

“There is absolutely no option than to close the runway for these six weeks because it is not a repair work. It is a new construction of the whole surface of the building.”

Goetsch said that the runway had to be monolithic needing interlocked layers to guarantee a life span of 10 years.

He said that it was in the interest of all stakeholders to ensure that the work on the runway was carried out as quickly as possible.

“On our end, we guarantee that within the 6 weeks, the repair work is done. This is subject to the fulfilment of the obligation of all stakeholders,” he said.

“Under the leadership of the Minister of State for Aviation, all stakeholders are on board.

“Everything is going on very smoothly according to plan and there is no doubt that the obligation of all stakeholders is fulfilled.”

Also speaking, the Nigerian Society of Engineers said that it was possible to conduct the reconstruction of the runway without closing the airport.

“The society insists that it should be reconstructed immediately.”

President of the society, Mr Otis Anyaeji, noted that closing the airport was like shutting down the country.

According to him, absence of a second runway at the Nnamdi Azikiwe International Airport, Abuja, meant lack of excess runway capacity to temporarily close down the only runway for repair.

He said that the society recommended for the runway to be re-constructed without closing the airport using segmented approach and known safety risk management procedures.