Who Is Afraid Of NTDC Bill?

NUMEROUS nations have figured out how to expand their role in the global economy through the advancement of tourism, hence the development of the indisputable money-spinning industry, is increasingly viewed as an important tool in promoting economic growth, alleviating poverty, creating job, as well as contributing to national development goals.

The United Nations for World Tourism Organisations (UNWTO) in 2002 noted that numerous studies have demonstrated that tourism can play a significant role in balanced sustainable development, and it can be effectively harnessed to generate net benefits for the poor, adding that tourism is a principal export for 83 per cent of developing countries, and it is the most significant source of foreign exchange after petroleum.

However, in spite of huge benefits of tourism and the innumerable and enviable tourism assets and destinations which dotted the landscape of Nigeria, the country could be said not to have really benefited from the goodies of the industry.

The threat to the development, promotion and blossoming of tourism in Nigeria is not unconnected to the dearth of contemporary, well-fettered legal framework, duly passed and assented to by the legislature and the executive, to empower the Nigerian Tourism Development Corporation (NTDC) which is the apex tourism body in the country that is responsible for the marketing and promotion the nation’s tourism. There is no gainsaying the fact that the absence of a legal framework in the constitution and statutes had hitherto stagnated the development of the Nigerian tourism sector. Hence, putting the sector on a fast track of development, thereby making it vibrant and economically rewarding calls for a contemporary legal framework.

This propelled the initiation of Nigeria Tourism Development Authority (NTDA), Act N137 LFN, 2004 (Repeal and Enactment) Bill 2017 (SB 429), which no doubt, is long overdue, as the Law that establish the NTDC in 1992, which the Corporation operates with, could be best described as obsolete.

To answer the earnest prayers of the progressive-minded tourism, travel and hospitality stakeholders in the country, God installed a crop of proactive patriots, in the 8th Senate, who are willing to inconvenient themselves to ensure planting and entrenching of fundamental legislations necessary to propel an enviable positive change and development in Nigeria.

It is only the enemies of progress of the Nigerian tourism industry that will not commend the Senate for the giant stride of coming out with one of the best proactive bills about NTDC, to ensure the needed fundamental legislation needed to establish a well-grounded, globally proactive tourism sector in Nigeria.

Though the Senate was on recess, yet majority of the members of the Senate Tourism Committee were present at the public hearing. Even the Senate President, Dr. Bukola Saraki, who could not make it to the hearing, made it a point of duty to be ably represented by Senator Bala Ibn N Allah, Senate Minority Whip, who conveyed the thought of the Senate President, saying “that the NTDA Bill will reflect the intervention of those stakeholders.” 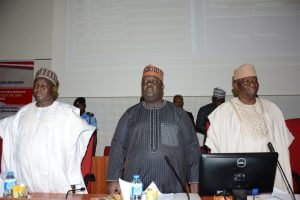 The Committee on Culture and Tourism under the effective leadership of Senator Mathew Urhoghide, through its activities thus far, has distinguished itself as having a rare interest in development of the Nigerian tourism by ensuring the planting and entrenching the fundamental legislations necessary for the sector to blossom and for seamless exploration and enhancement of tourism potentialities by the nation and its citizens.

It is on record that that barely three month ago, the same Senator Urhoghide-led committee gathered tourism stakeholders at the same venue for imputation of their views, contributions and input into NIHOTOUR Bill 2017, which was undeniably successfully conducted and applauded by the stakeholders.

The 2017 NTDC bill, which came up for public hearing at Conference Room 022 of the Senate building under the auspices of the Senate Committee on Culture and Tourism, on Thursday, August 17, 2017 was widely accepted amongst stakeholders during the hearing.

Looking at the bill objectively it must be taken alongside the peculiar political and economic terrain of the country as well as not fall short of best practices.

In moving forward, the 2017 bill as against the Extant Act is opening up avenues of collaboration with stakeholders and the private sector, hoping to enter into partnerships and understandings that will promote the Industry.

Even the Tourism Development Fund (TDF) which has attracted a lot of attention is not a new concept and has been given executive approval twice by two past Presidents; the first was by President Olusegun Obasanjo and the second by President Goodluck Jonathan. It therefore became expedient to translate it into a bill for proper execution, using the NTDC, being the apex tourism implementing agency, to stand upon. This scenario is not peculiar to Nigeria alone: Ghana’s National Tourism Authority also set up an identical fund with a Trust Board and went further to make provisions enabling staff of the Authority manage the fund and be accountable to the Board. In the same manner, a close look at the NTDC Bill gives the President the powers to appoint a Board of Trustees to overlook and administer the fund, which means the NTDC will not have total or absolute control over the fund as being propagated to the public. What is uppermost in the minds of the drafters is the benefit of the fund which inter alia will be to: Provide funding for tourism development and tourism related projects and programs, marketing and promotion of tourism, development and promotion of entrepreneurial activities, tourism export trade oriented activities and capacity building

It is unarguable that the purpose of the fund is laudable and the benefits immeasurable, and therefore, only proper, for the President in his wisdom (once the bill is passed) to set up the appropriate body to manage it with NTDC acting most probably as a clearing house.

The bill also amends the tour operating arm of the NTDC by increasing its branches and trying to improve upon domestic tourism through partnerships with private stakeholders in the international fora to attract tourists to the country. This is all with the intent of creating an effective model for the private sector. This tour operating division has been in NTDC since 1992 and practitioners are aware that the division is not in competition with them, but compliment their activities. The tour operating arm is designed to act as a bench mark for private sector operations and government’s commitment is to ensure tourism in Nigeria is at par with best practices driven by the private sector and regulated by government to ensure quality assurance and best standards.

The bill also imported the concept of accreditation in an attempt to regulate the industry for best standards and practice. Again this is not new amongst leading tourism countries in Africa, wherein their national bodies regulate tourism by certifying, grading and classifying tourism outfits in those countries. A good example is the South African Tourism Act of 2014, which makes provision for grading and quality assurance by explicitly providing for “the establishment of one or more schemes in terms of which tourism services, facilities and products are graded and classified”. This mandate brought about the setting up of the Tourism Grading Council of South Africa (TGCSA) to regulate the industry for appropriate standards, which is what Nigeria seeks to do.

In taking cognizance of the 2013 Supreme Court judgment, the bill expunged laws creating state and local government tourism boards and made no tourism laws for the states mindful of the fact that they are to make their own tourism laws.

What is pertinent is that the country needs to harness its great tourism potentials and make it the best alternative to oil by creating jobs and revamping the economy, but this can only be achieved in line with international best practices as recommended by UNWTO, ECOWAS and others as well as benchmarking ourselves with nations within the continent. The country is therefore in dire need of a tourism Act that can standardize the industry, as it is obvious that we cannot operate 36 different standards in tourism and expect to successfully develop the industry. The 2017 NTDC bill has been drafted to at least cross the hurdle and can always be further amended to perfection.

In spite of the simplicity and clarity of terms in the proposed bill, a crop of mentally short-sighted reactionaries and mediocre, who have constituted themselves into a cabal that consistently do not want NTDC and the Nigerian tourism to growth, are now brandishing the bill as autocratic and insensitive to the plight of practitioners in the field. The dark elements, rather than seeing the strength and huge benefits of the proposed attempts to enact, repeal and re-amend the NTDC Bill to drive the Nigerian tourism, travel and hospitality industries, see errors. This crop of people, who have constituted themselves as the wall of Jericho for the Nigerian Tourism, with special highly destructive missiles on the NTDC and its leadership, are afraid of the passage into law of the proposed Bill for their selfish and devilish interest. They needed to be reminded that NTDC is not a personal property.”

It should be reiterated that the Bill was principally drafted to change the dynamics of tourism in Nigeria positively.

Meanwhile, the foresight of the vibrant NTDC Director-General, Mr. Folorunsho Coker, for the Nigerian tourism industry highly commendable, for appealing to the economic sensibilities and patriotism of the stakeholders. The NTDC boss has thus far displayed a robust sense of understanding of the tourism sector, while his unique style of approach to explore the digital technology to drive the promotion of the industry is creditable. His 5-point plan, acronymic ‘CHIEF’ to drive the promotion of the money-spinning industry, gave a green signal for the rapid and unprecedented growth of the Nigerian tourism.

Suffice it to say that all the Nigerian tourism industry needs to practically grow and be well-promoted as expected, in line with the global best practices and standards, making the country stand tall in the comity of tourism nations across the globe, is the promotion of corporate interest above personal and selfish ones among the industry’s stakeholders.

Let all the tourism stakeholders in the country form a productive synergy with the leadership of the NTDC that is set to revolutionise tourism sector for blissful economic engagement, and work for the success of the Corporation’s Bill, to improve the lots of the Nigerian Tourism practitioners and the nation at large.