SHAREHOLDERS of Ashaka Cement otherwise known as AshakaCem Plc at a Court-Ordered meeting held at the Sheraton Hotels in Abuja on Monday ceded the nomenclature of the company to Lafarge Africa, her mother organization which before now held the lion share in the cement manufacturing firm.

The shareholders who voted out rightly or by proxy, unanimously voted in favour of the Scheme of Arrangement in which 202 units of AshakaCem shares will be exchanged for 57 units of Lafarge Africa shares (WAPCO) and a payment of N2.00 per share.

Sticking to Section 539 of Companies and Allied Matters Act, the Scheme of Arrangement that provides for the reorganization of the company’s capital and shareholding structure, the shareholders have allowed 57 ordinary shares of Lafarge Africa to be issued, allotted and credited as fully paid up to a holder of every 202 AshakaCem shares.

Under the new arrangement, 85,230,744 ordinary shares of Lafarge Africa will be issued, allotted and credited as fully paid up to the holders as part consideration for the scheme shares.

Furthermore, through the Voluntary Delisting process, the Company provide an Exit Opportunity to minority shareholders who do not wish to remain in an unlisted company. Over the last 5 years, there is little or no trading activity with only 0.20% of the shares held by the minority shareholders being traded. There has also been a measurable fall in trading volumes over the last twelve (12) months from 200,090 units in 2015 to 77,810 units in the same period in 2016. Neither the Company nor any shareholders are benefiting from the continued listing as shareholders are not getting any exit opportunity and their investments have been locked up and they find it difficult to dispose of their shareholding. Moreover, the Company is bearing unnecessary cost in complying with its listing obligations. The Exit Consideration provides all shareholders the opportunity to benefit from the more diversified earnings of Lafarge Africa Plc.

Speaking on the new Scheme, the Acting Chairman, Mrs. Edit Onwuchekwa said the successful completion of the scheme will result in AshakaCem being wholly owned by Lafarge Africa and/ or its nomine(s).

Prior to the latest development, the company announced N2billion as profit after tax for the year ended 2016. This is against the N2.7 billion profit it posted in 2015.

The company’s acting Chairman, Mrs. Edith Onwuchekwa who gave this disclosure at its 42nd Annual General Meeting in Abuja, said the devaluation of the naira and its consequent impact on operating costs had reduced the company’s profit before tax by 17 per cent.

Thankfully, she said the company was able to save N2.6 billion by leveraging with Lafarge Africa PLC to reduce commercial and information technology activities.

She added that despite the challenging economic environment in 2016, the company maintained optimal operation as production was on schedule with 648,585 metric tonnes cement dispatches, which was 6.5% higher than the 609,000 metric tonnes dispatched in 2015.

Onwuchekwa said: “2016 was a difficult and challenging year, but we had serious commitment from management and staff and also from stakeholders. You could see that during my statement, I appreciated the management and stakeholders because they contributed to help us wade through the storm in 2016 and we were able to declare profitability.

AshakaCem Plc is a cement manufacturing and marketing company. The Company was incorporated in August 1974 and commenced production in September 1979 under the name Ashaka Cement Company Limited. The Company’s registered office is at Ashaka Works, Near Gombe, Gombe State, Nigeria. The issued, subscribed and paid-up equity share capital of the Company is N1,119,727,000 comprising of 2,239,453,125 shares. 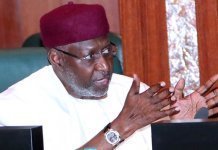 I Conceded To Refund $300,000 After EFCC Threatened —Ex-Air Force Marshal