EKITI State Deputy Governor, Professor Kolapo Eleka, has been elected as the governorship candidate of the Peoples Democratic Party (PDP) in the July 14 governorship election in the state.

Professor Olusola Eleka, a lecturer in the Department of Building, Obafemi Awolowo University (OAU), Ile-Ife, scored a total of 1,191 to defeat his only co-contestant, Prince Adedayo Adeyeye, who ran against him in the contest.

The third contestant and the Senator representing Ekiti South District, Mrs. Biodun Olujimi, had earlier stepped down from the race to join forces with Prince Adeyeye.

The chairman of the Ekiti State Congress Committee of the PDP and governor of Delta State, Dr. Ifeanyi Okowa, who conducted the election, announced that Professor Kolapo Olusola polled a total of 1,190 votes out of the total valid votes of 1,961 valid votes, while Prince Adedayo Adeyeye polled a total of 771 votes. There were seven void votes.

Governor Okowa described the election as keenly contested, and congratulated Ekiti State, Professor Olusola and Prince Adeyeye for the peaceful conduct of the exercise.

He thanked members of his committee as well as the people of Ekiti State for their peaceful conduct, and made a veiled reference to the rancorous primary of the APC, saying “if you think it’s easy, think back a few days ago.”

Reacting to his emergence as the candidate, Professor Olusola thanked the delegates for preferring him, and particularly expressed gratitude to his boss, Governor Ayodele Fayose, “for standing solidly behind me.”

Olusola also congratulated Prince Adeyeye, whom he described as “a man with a penchant for internal democracy” for what he said was “a keenly contested exercise.”

He called for the support of Prince Adeyeye and Senator Olujimi, saying “please join hands with me to give our party the necessary leverage,” saying his “victory is not an end but a means to an end.”

He said he was reaffirming his readiness for the challenge to serve the people of Ekiti State as the candidate of the party and subsequently as the governor of the state.

Fayose, while reacting to the outcome of the contest, said: “I appreciate God and thank the committee for doing a good job. I thank Prince Adeyeye and Senator Olujimi for their courage.

“In journeys like this, there would be a divide. They are leaders of the party irrespective of what has happened before this primary. They should join hands with the party to win the ultimate which is the July 14 election. I commend all the delegate for exercising their civic right.

I urge all the political parties to emulate the PDP in organising a peaceful, credible, free and fair primary.

“I will reach out to Prince Adeyeye and Senator Olujimi and personally visit them. I appeal to them in the overall interest of the party to work for our common goal.” 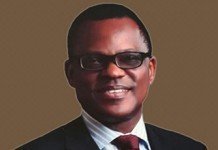