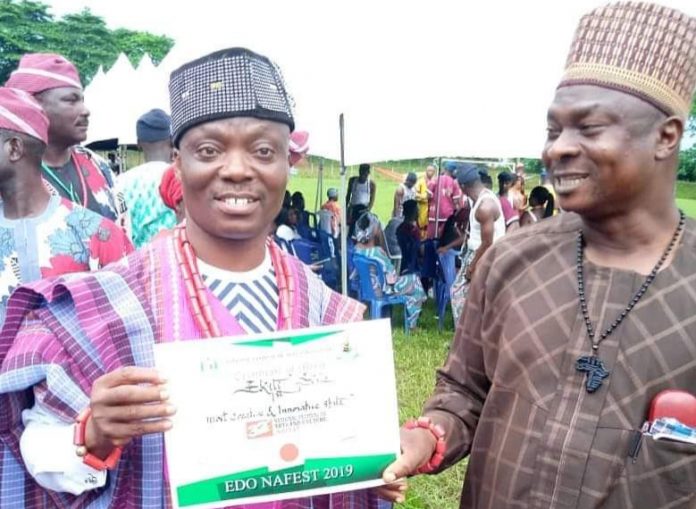 The image of Ekiti State soared to high heaven as the Ekiti State cultural troupe emerged as the Best Most Culturally Creative and Innovative State in Nigeria at the 2019 National Festival of Arts and Culture (NAFEST), held at the University of Benin Sports Complex, Benin, Edo State.

The Governor of Ekiti State Dr Kayode Fayemi had mobilised the Ekiti State Council for Arts and Culture, under Amb. Wale Ojo-Lanre to lead a 48- member contingent including the Permanent Secretary, Alhaji Ganiyu Titilope Ibrahim to Benin, Edo State to join other states in participating in the 39th Edition of the National Arts and Culture Festival.

The Ekiti Contingent had gone to the event with the major aim of showcasing the preparation of Royal Pounded Yam in line with the theme of this year’s NAFEST: Our Royalty, Our Pride Armed with two mortals, four pestles, bags of condiments of local soup preparation, seasoned bushmeat and set of Ekiti farm yam tubers, the contingent headed for Benin to culturally showcase the beauty of Ekiti  pounded Our.

The entry of Ekiti Contingent was markedly noticed at the Federal Government Girls  College Benin which was the camp for the delegates when the contingent displayed a welcome cultural show to the amazement of others participants who were there before them.

To further demonstrate the contingent’s tenacity of purpose, it immediately set up a kitchen at the Eweka Hall where pounded yam was made available at a la carte.

Having established a culturally dignified presence at the Camp, the Ekiti Contingent shifted attention to the Arts and Craft Exhibition Ground at Cultural Center Benin City where it established a culturally beautiful pavilion manned by the President of Ekiti State Association of Professional Artists, Mr Jacob Ayodele who ensured that the beauty of Ekiti indigenous arts and crafts was exposed to the teaming participants who scrambled to visit Ekiti Pavilion where Ekiti State Cultural Troupe maintained glorious musical presence.

However, the glory of Ekiti State shone brightly at the presentation of the Royal Cuisines by all the participating States of the Federation held at the Benin Museum.

The Ekiti Pavilion discerned itself from the others by its sheer employment of culturally local contents both in the construction of its pavilion, cooking utensils, soup ingredients, method of preparation and serving to the process of eating the pounded yam by the King whose mouth must not be seen while eating.

The creativity and innovation  which Ekiti State Contingent injected into the packaging and presentation of its content at the event did not only impressed the adjudicators but overwhelmed the imagination of Otunba Olusegun Runsewe, Director-General, National Council for Arts and Culture (NCAC), Abuja, who publicly acknowledged this when he led  a team of distinguished guests on a visit to Ekiti Cuisine Pavilion.

Otunba Runsewe, who announced the Award of 1st position as the Most Creative and Innovative State in terms of culture in Nigeria commended Governor Fayemi for his brilliant cultural vision which has continued to glitter globally.